Professor Sarah Bryant has been named a 2021-2022 Faculty Fellow of the Collaborative Arts Research Initiative (CARI). According to the press release, “These fellows will participate in a collaborative arts research community for the next two years. The CARI Faculty Fellowship aims to help fellows diversify the impact of their work and to develop new interdisciplinary research.” Learn more about CARI fellowship here.

Dr. Bharat Mehra is a featured speaker in a workshop on December 16 offered by the Mortenson Center for International Library Programs and Naseej Academy. Titled, “Webinar on Infodemic, Info-Vaccine and Libraries during the COVID-19 Pandemic,” the event also features library leaders from Kent State University and the University of Illinois at Urbana-Champaign.

Dr. Jeff Weddle’s book Bohemian New Orleans: The Story of the Outsider and Loujon Press is being reissued in paperback. Initially published in 2007, the hard cover book was published through the University Press of Mississippi. More information on the title can be found here. Dr. Weddle also has a brand-new publication that should be available in the coming month. A poetry collection, There’s More To It Than That, is being published by Poetic Justice Books.

Anita Delp, a current student at UA SLIS and employee of the Cecil County Public Library in Maryland, and her team were awarded Employee of the Year by the Citizens for Maryland Libraries. Additionally, Katelyn McLimans (MLIS ’18) is the Youth Services supervisor for the library! A link to the Facebook post can be found here. We are proud to have motivated and successful librarians that are #BuiltByBama.

Juliana Mestre had a paper from Dr. Elmborg’s Professional Paths class in Fall 2019 published online on November 26. Mestre’s essay critiques technology-centered makerspaces, highlighting potential drawbacks such as cost, threats to library autonomy, and “an adherence to design epistemology that overvalues the monetization of knowledge products.” The essay can be found here. 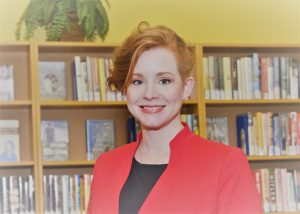 This month, SLIS alumna Amanda Jackson was interviewed as our first monthly alumni web feature. She graduated in 2003 and her area of focus was management/administration. When asked why she chose that specific area, Jackson said it was about, “knowing myself, and knowing strengths and weaknesses.” She cited her skills to manage responsibilities, as well as her power to advocate and change things. Jackson currently works as the Director of the Chesapeake Library System in Chesapeake, Virginia. They have seven branch locations and serve nearly a quarter of a million people. Some of the responsibilities she has are managing budgets, strategic planning, city management, but those change nearly every day.

It is no secret that the world is in a current state of crisis as the COVID-19 pandemic rages on. When asked how COVID-19 has impacted the services her library system provides, Jackson firmly stated, “The pandemic really was the defining point where the library determined what it was going to be.” Prompted to explain further, Jackson said that the library is meant to serve the community – even calling it the heartbeat – and that the library is meant to uphold and promote democracy. Through the actions carried out by Jackson, she wanted to show the community the value of the institution. However, as an administrator, she cited the need for balance in her workplace. “Number one, I need to take care of my people. Number two, I have to identify the vitality [of the library] to the community and put value on library services.” The coronavirus made the library system ask themselves what they needed to do to remain engaged and relevant to the community. As far as specific measures, her library system started offering curbside service, a feature not uncommon with many businesses since the COVID-19 outbreak. Additionally, Jackson was keenly aware of the PPE (personal protective equipment) shortage and immediately saw an opportunity to help the community she serves. More than 4,000 masks were sewn, as well as 100 gowns for first responders with sewing machines that had been purchased for sewing classes pre-pandemic. Her staff used those machines, as well as ones brought from home, to supply the approximate 5,000 city employees of the City of Chesapeake so they could return to work safely. The libraries were also utilized as absentee and early voting sites for the presidential election. While other libraries in the area shut down, Jackson and her team saw the needs of the community they serve and have worked ferociously to meet those needs.

Amanda was asked “If you could come back to UA and take any class, what would it be and why?” Surprisingly, she said she would probably not take an LS (library science) class, but rather a business class, such as accounting or business economics. She has considered getting a second master’s in public administration or in business, as the position she has now as the Director of the Chesapeake Library System frequently calls on the skills and jargon from those areas of study. She said if she could offer one piece of advice to current or prospective students, it would be “know yourself – know your strengths. The library world is huge! Figure out what you love to do and find a space for that. Libraries are always evolving.” Jackson also said that sometimes you need to be innovative to enact changes or to make a space to do what you love. She pressed further and said she had originally never wanted to be a librarian, as her mother was one. The semester of her graduation, she was greatly second-guessing herself regarding choosing library science, but after working in the field for so long she said that she would not have chosen anything else. One of the programs that Amanda has created is through working with local jails to create a short stories program. Essentially, the inmates are recorded reading children’s stories, and those recordings are mailed to their children. Jackson said that the program has been wildly successful and made a substantial impact on the lives of the inmates and their families.

The last question that was asked of Amanda was “Which ALA Core Value most inspires the work you do?” She pondered and responded confidently, “Equity.” Jackson firmly believes that equity is a massive piece of the commitment to diversity and inclusion. She further explained that for upper- and middle-class families, the library is a different place for them but that the library is the great equalizer for all who enter through its doors. “I don’t have a vision [for the library], but my mission is to make sure there is a space for the poor mother, the young man with intellectual disabilities, and the refugee seeking asylum. It is vital to show disenfranchised individuals that they have a space where their voices can be heard.”

At SLIS, we are extremely proud to have an alumnus that represents our program so well. Congratulations on all your success Amanda, and we wish you the very best through these ever-changing times!

Note: These features, and most SLIS new items, are being written by Elizabeth Meads, MLIS student, with assistance from Dr. Yates.

Dr. Laurie Bonnici co-presented at the annual Document Academy DOCAM conference on August 6th, 2020. “If an antelope can be a document, then…can monsters be anecdata?” compares the fascination with folkloric traditions or myths, such as mermaids or the Kraken, to the notion of anecdata – an information phenomenon described as a bridge connecting people with codified or discoverable information. “Anecdata is little-known knowledge imparted by common people passed through proximal ties.” This work was published in October 2020, titled “Embracing Monsters as Documents.” Well done, Dr. Bonnici!

Dr. James Elmborg spoke on a panel at the Association of Moving Image Archivists (AMIA) conference on November 17. Titled “Increasing Equity in Audiovisual Archiving through Fellowship Programs,” the panel addressed concerns within the field of audiovisual archiving, such as diversity, equity, and inclusion. Several programs are addressing the concerns presented, including WGBH’s Public Broadcasting Preservation Fellowship (PBPF), The AMIA Diversity and Inclusion Fellowship Program (ADIFP), and BAVC’s Community-based Preservation Education and Training Program (CPET). This panel had representatives from each group present to discuss the achievements, challenges, and strategies from their respective programs. Hats off to Dr. Elmborg!

Dr. Miriam Sweeney virtually attended the Association of Internet Researchers conference, held on October 27th -31st. Featured as a co-speaker for a roundtable event, Dr. Sweeney spoke on “the relationship between humans, machines, and culture as a way to problematize popular notions of ‘algorithmic culture’ that tend to reify code as a rational tool and de-emphasize the roles of humanism, ideology, and power in the process.” Referring to this as “Facing Our Computers” Dr. Sweeney’s creative play on words is meant as “a playful and multi-layered provocation for exploring the design, use, and meaning of digital assistant technologies, artificial intelligence, and related smart technologies that are part of our ubiquitous technology ecosystem.” Well done, Dr. Sweeney!

SLIS is proud to celebrate two students who recently completed public defenses of their thesis projects.

Eric Coleman, MFA Book Arts student, defended his thesis on October 2. Titled “Year, Make & Model,” Eric’s project parallels his journey in printmaking, saying, “it’s the culmination of my work with vehicle restoration. It highlights the cars & relationships throughout a ten-year period of my life. This book is not only a glimpse into the inner workings of my psyche, but it’s a world that most may not consider.” Eric’s thesis committee was chaired by Prof. Anna Embree. Coleman will be graduate in December 2020. Join us in wishing congratulations to Eric for a successful thesis defense!

On October 19, Juliana Mestre successfully defended her MLIS thesis entitled, “A Derridean Reclamation of Hospitality in Library and Information Science.” A work of information theory, this thesis uses philosophical deconstruction to argue that learning to embrace hospitality’s irreducible paradoxes provides a model for how library practitioners can, through discourse, continue to serve patrons authentically despite other seemingly unresolvable conflicts in professional values. Juliana’s thesis committee was chaired by Dr. John Burgess. Mestre will graduate with her MLIS in December 2020 and intends to pursue a PhD in LIS. Congratulations to Juliana on this great accomplishment!