On Alumni Day, Friday, November 10th, the Library School Association of the School of Library and Information Studies at the University of Alabama awarded the 2017 Distinguished Alumni Award to Irene S. (Renee) Blalock and Timothy Alan Lewis.

This award was created to recognize SLIS alumni who have made an outstanding contribution to the library, information, media, or book arts professions and have achieved distinction in their field.  Those considered for the Distinguished Alumni Award are judged on the full range of their professional accomplishments. 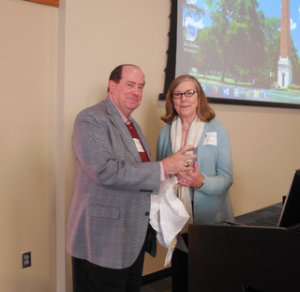 Irene S. (Renee) Blalock received her MLS in 1981.  Renee spent her entire professional career at the largest public library in Alabama, the Birmingham Public Library, serving in the Literature Department, Southern History Department, as a Branch Head, Collection Department Manager, Regional Coordinator, Operational Coordinator, Associate Director, and finally Director from 2009 to 2014.  In her many years of active service, Renee became an indispensable part of the volunteer community in Birmingham and was involved in many community activities and affiliations.  Examples of her professional leadership include President of the Jefferson County Library Cooperative, the Jefferson County Public Library Association, and the University of Alabama Library School Association.  Further, she has served on committees of the American Library Association and was on the Board of the national Public Library Association. 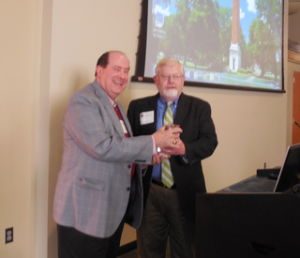 Tim Lewis received his MLS in 1983 and his law degree from the University of Alabama School of Law in 1984.  Tim has spent his professional career at the Library of the Supreme Court, first as Reader Services Librarian, then Associate Director, and finally as Director of the Law Library and State Law Librarian from 1992 to the present.  He is responsible for the management of the largest public law library in Alabama, advises and assists county law librarians with legal information needs, and provides leadership to the law library community in Alabama.  Tim has served as President of the Alabama Bench and Bar Historical Society, the Law Library Association of Alabama, and is on the Board of Directors of the Alabama Center for Law and Civic Education.  Tim has shared his experience by authoring numerous articles concerning legal information and has made more than two dozen presentations at seminars and other programs on this topic.

The Distinguished Alumni Award was established by the Library School Association in 2000. With the announcement of the 2017 honorees, a total of 15 alumni have been recognized with the award.  The name of each recipient is placed on a permanent plaque displayed at SLIS in Gorgas Library.